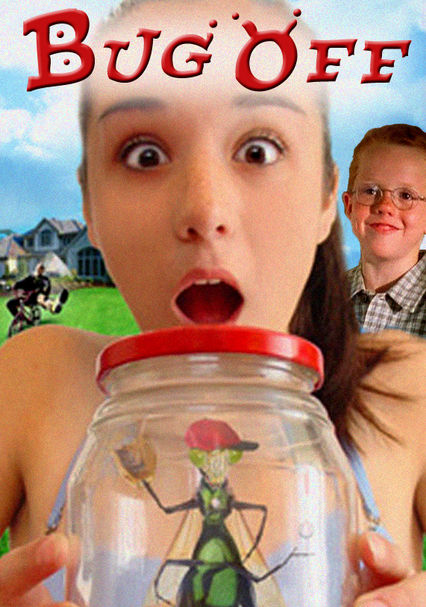 2001 PG 1h 24m DVD
Krista's younger brother can be such a pest that she secretly wishes he would turn into a bug. When an alien babysitter catches wind of Krista's wish, she grants it. Now, Krista is the only one who can save her brother-turned-bug.

Parents need to know that Bug Off! is a sibling rivalry film where a girl gets her wish that her brother be turned into a bug. The film is largely spent navigating the brother-is-a-bug scenario, so for any kids squeamish about giant beetles/cockroaches, it could be a difficult watch. There's also some crude humor used of the classic little brother variety, i.e., loads of belching and pranks, but otherwise the messages are of cooperation and sibling love.

A man and woman kiss briefly in a park. A boy drops a pair of girl's underwear onto his sister's head below from her bedroom window.

Some gross-out humor, like belching, and some icky factor scare tactics, like in the scene where Krista dreams she is covered with giant bugs. Elsewhere, there's very light peril in the form of dealing with humans disguised as aliens whose agendas are unknown, but ultimately benign.

There are juvenile, sibling-typical insults used throughout, but no profanity.

Shows the value of cooperation and getting along with family members. It illustrates the way a common enemy can bring two people together.