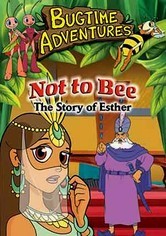 2006 NR 0h 25m DVD
Narrated by Willie Aames ("Eight Is Enough"), this Christian animated series brings kids' favorite Bible stories to life, as seen through the eyes of the six-legged residents of Bugglesville. When King Xerxes is tricked by Haman into signing an order to eliminate the Israelites, Queen Esther risks her life to appeal to Xerxes and persuade him to reconsider.