Bullies Are a Pain in the Brain 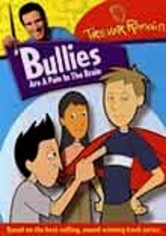 Bullies Are a Pain in the Brain

2005 NR 1h 20m DVD
Award-winning children's author Trevor Romain hosts this lively program for kids in grades two to seven, mixing animation and live action to tell the story of a boy named Jack who's being pushed around by a bully. Jack has tried everything to fend off the guy who's picking on him, but nothing seems to work. Now that Jack's resorted to skipping school, it's time for Trevor to step in and show him how to get the bully to back off.