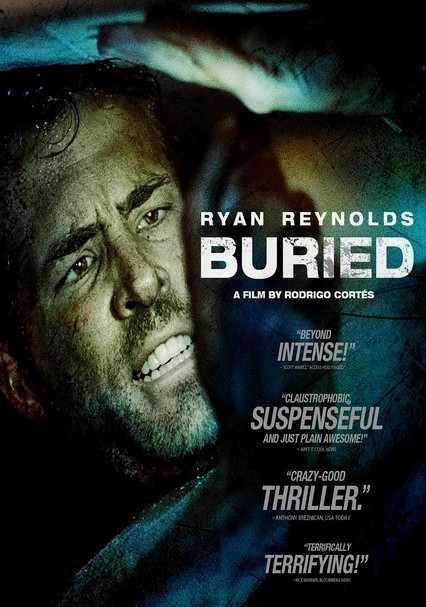 2010 R 1h 35m Blu-ray / DVD
While on a job in Iraq, civilian contractor Paul Conroy is attacked and kidnapped, then awakens to find himself buried alive in the middle of the desert with nothing but a lighter, a candle, a cell phone and a knife.

Parents need to know that Buried is a very intense thriller that takes place entirely within a coffin buried under the sand. Considering that most people have an innate fear of being buried alive, the movie can be nearly excruciating to watch -- although it's very well made. The main character (played by Ryan Reynolds) has a lighter, a cell phone, and some other supplies, but he's the only person shown on screen. Expect some intense behavior and strong language (including many uses of "f--k"). Brave older teens and grown-ups may be intrigued, but be ready for nightmares.

Nothing is shown, but Paul is accused of having an affair with a co-worker, which he denies.

Paul is threatened by his unseen captors, and he shouts at various people on his cell phone. Viewers see grainy video images (on a cell phone) of another girl being tortured with a gun to her head. In another scene, Paul must chop off his finger to appease his tormenters, but nothing is shown. A snake enters the coffin, and Paul kills it with fire.

The movie seems to say that sometimes bad things happen to good people, and there's very little anyone can do about it.

One mention of SeaWorld.

Paul has a metal flask with him, but it's never revealed what's inside. It could be alcohol or water. He also carries and takes pills for anxiety.