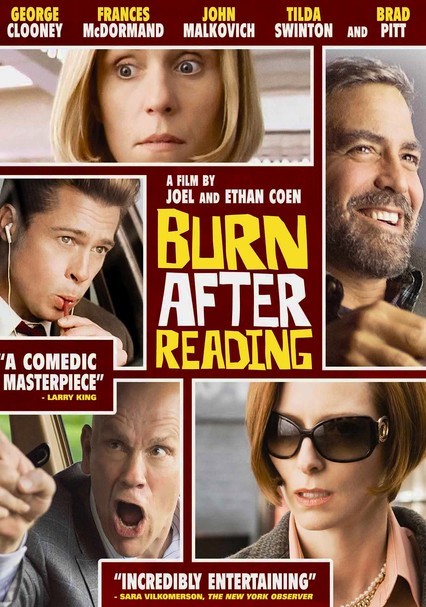 2008 R 1h 36m Blu-ray / DVD
In this darkly comic farce, an ousted CIA official loses his penned memoir to a pair of moronic gym employees who use it to try and turn a profit. Brad Pitt and Frances McDormand co-star in this irreverent tale of poorly executed espionage.

Parents need to know that this quirky comic thriller has much in common with others in the Coen brothers' canon: It's very funny and very violent. There's plenty of sex (though not much nudity) and swearing ("f--k"s galore), and characters drink, like, manipulate, and whatever else they need to do to promote their own selfish interests. But teens may still want to see it, both because it stars Brad Pitt and George Clooney and because so many of the Coens' previous comedies have become cult favorites (Fargo, Raising Arizona, The Big Lebowski).

Some scenes show people having sex -- sound effects, but no nudity. The couples are shown talking in bed afterward, presumably naked under the covers. One character builds an elaborate sex chair with an extremely crass sexual accessory, which he shows off to a date.

Several moments of violence -- involving fists, guns, knives, and an axe -- pop up so suddenly that they're quite startling. The fights are realistic, bloody, and gory. People are killed, their bodies disposed of. Some characters also use cars as weapons, intentionally ramming into other vehicles.

Plenty of swearing, including "f--k," "s--t," "bitch," and more. Every character's vocabulary is liberally peppered with curses.

Everyone in the movie is a liar, pursuing selfish ends. Husbands and wives cheat on each other; one man trolls online dating sites for sex partners and then lies shamelessly to get them into bed; another hides the fact that he's been fired; and two other people try to pass themselves off as spies to sell stolen documents. Even the characters who initially seem like good people end up displaying their darker, pettier side.

Some brands of alcohol are referred to by name and/or shown on screen. Several characters' cars are shown repeatedly, including their logos. One fitness-obsessed man is insulted when his fancy bike is described as a "Schwinn." He's also practically glued to his iPod. There are mentions of PCs, Macs, and Gatorade, as well as logos for Safeway, 7-Eleven, and Tropicana.

Osborne Cox drinks often, and some scenes show him carefully preparing his beverages. In several scenes, he's clearly drunk. A coworker says Cox has a drinking problem, sending him into a rage.