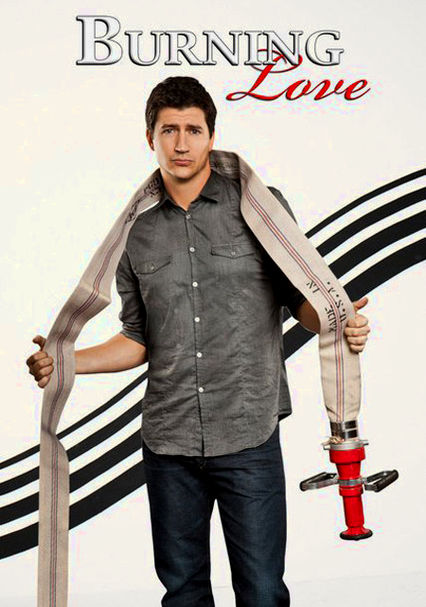 2013 NR 1 season
The hit web spoof makes its TV debut as lonely fireman Mark Orlando embarks on a quest to find his perfect mate, reality show-style. As the shallow Mark fields contestants, the show skewers the familiar tropes of "The Bachelor" and similar shows.

Parents need to know that Burning Love is a parody of dating shows like The Bachelor, and it's just as suggestive as what it mocks. Women on the show wear brief, bare outfits and there's a lot of discussion about contestants' looks. There's a good deal of flirting, kissing, and many sexual situations, like when a woman pins a man up against a wall and kisses him wetly while another man writhes against her from behind. Sexual innuendo is also frequent. Cast members drink constantly and sometimes act drunk, slurring words and bursting into tears. Viewers also see occasional blurred nudity, as when a man squats to use the bathroom in front of a crowd. There are bleeped curses on every episode, and unbleeped ones too: "I'm not into making gay s--t," a male contestant says when a female one asks him to make a puppet.

Lots of flirting, some kissing, and plenty of innuendo, like when a woman pushes a man up against a wall to kiss him and then another man sandwiches the woman salaciously. We also see a bit of blurred nudity when one man decides to go to the bathroom near a campfire. Sexual innuendo includes a man saying he's slept with many of his cousins, and a man who says he's had sex with people who were unconscious.

Some cartoonish violence over absurdities such as two men scuffling over whether one of the men's names is really a girl's name.

Bleeped cursing: "Oh f--k me!" exclaims a bachelorette when she sees a handsome man. There are also many veiled references to body parts, as when a bachelorette suggestively asks suitors to "hold her box" (while holding an actual box).

Satire is the name of the game here, not genuine emotion, but the show clearly makes fun of reality TV and the culture that surrounds it. The singles looking for love choose or reject each other on nonsensical reasons; a dad is roundly mocked for loving and mentioning his son too often.

Contestants frequently drink onscreen and some act drunk, slurring words, stumbling around. One contestant is ejected due to his drunkenness. A man discusses an emotional trauma while gulping down glasses of brown liquid.