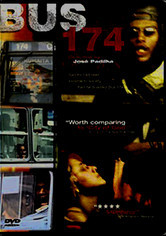 2002 R 2h 0m DVD
This moving documentary depicts a fateful day in June 2000 when a Rio de Janeiro bus carrying 12 passengers was hijacked by a man named Sandro do Nascimento. Cameras rolled as he touted his plans to kill all aboard but was finally persuaded to give himself up. A cop nonetheless opened fire on Nascimento, killing a passenger instead and causing the city's streets to erupt in riots. Details of Nascimento's very troubled childhood are also featured.