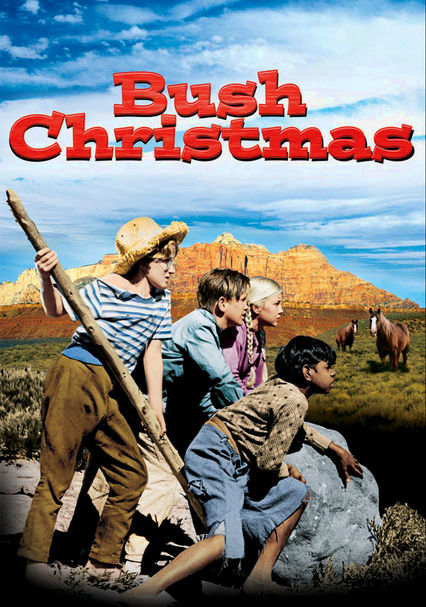 1947 NR 1h 17m DVD
When a band of outlaws steals their father's prize horses, four Australian siblings living in the outback have to revise their plans for Christmas -- mostly because Dad has canceled the holiday. But the kids soon concoct a scheme to reclaim their yuletide celebration, and it involves some good old-fashioned detective work. This postwar classic was later remade in the early 1980s, starring a young Nicole Kidman in one of her first film roles.

Parents need to know that Bush Christmas is a 1947 movie that may be a hard sell for kids. The biggest concern for parents is the casual racism that runs through the film. The Aborigine are referred to as "Australian blacks"; a boy talking about the perceived eccentricities of their Aborigine friend says dismissively, "The blacks have their own ideas"; and in one scene, the Aborigine boy is laughed at when, after getting lost in the bush, the white kids put mud on their faces as camouflage, and the mud has no effect on camouflaging the Aborigine boy's dark skin. Aside from this, there are some moments of suspense as the children get lost while pursuing wicked horse thieves and a scene that might repulse the squeamish as the children eat snakes and grubs after running out of food.

Horse thieves shoot rifles at children. The children release boulders at the horse thieves, who are trying to climb up a hill to catch them. The children eat snakes and grubs after running out of food.

As it's a movie from 1947, Aborigines are referred to as "Australian blacks," and in one scene, a boy, referring to their Aborigine friend, says, "the blacks have their own ideas."

The movie does promote teamwork as a positive virtue, and the girl of the group is portrayed as a strong leader who is just as capable of riding horses and surviving in the wild as the boys. However, the casual racism that runs throughout the movie must be noted.