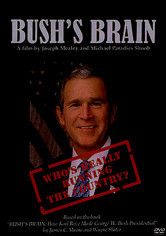 2004 PG-13 1h 20m DVD
Based on a book by James C. Moore and Wayne Slater, this documentary examines how Karl Rove, President George W. Bush's closest advisor, has shaped the policies of our nation, charting the role Rove has played in Bush's rise to the top. Feared and admired by Republicans and Democrats alike, Rove's remarkable political influence raises a disturbing question for Americans: Who really runs the country?