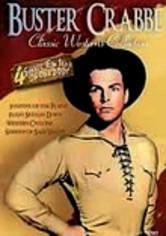 1942 NR 3h 52m DVD
Saddle up for this rousing quartet of Westerns, featuring the exploits of that legendary outlaw William H. Bonney, also known as Billy the Kid. B-movie hero Buster Crabbe stars as the Kid, who courts adventure alongside his trusty sidekick Fuzzy (Al St. John). The four films are Fugitive of the Plains, Fuzzy Settles Down, Western Cyclone and Sheriff of Sage Valley, in which Crabbe plays a double role as the Kid and his twin brother, Kansas Ed.