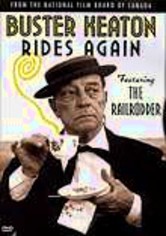 1965 UR 1h 20m DVD
In the 1965 documentary Buster Keaton Rides Again, viewers get a rare chance to hear the silent film star's speaking voice, captured during the shooting of The Railrodder. The latter film -- showcasing Keaton's trademark slapstick comedy -- follows an old man's tour across Canada on a railroad handcart, past the splendor of the country's most spectacular landmarks. It was one of the actor's final films.