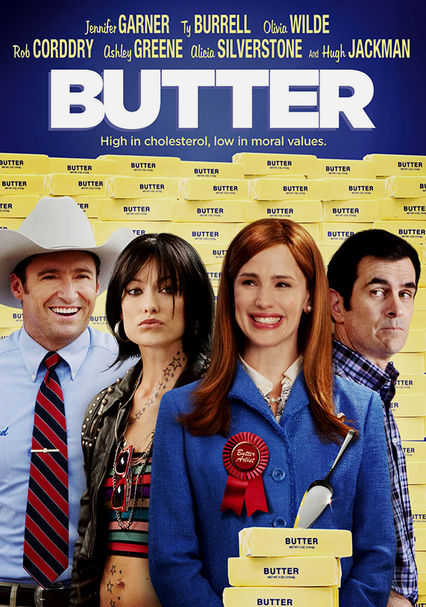 2011 R 1h 30m Blu-ray / DVD
When a gifted butter sculptor announces his retirement, his ambitious wife sees her hopes for future fame -- and the presidency -- melt away. She sets out to take up the mantle, but soon learns how cutthroat the world of pro butter sculpting can be.

Parents need to know that Butter is an edgy comedy that pushes all sorts of boundaries. For the most part, it works, but for some viewers, the jokes may go too far into raunchy/offensive territory. Expect a steady stream of curse words (everything from "damn" to "s--t" and "f--k"), pot smoking by a teenager, drinking (mostly social), lots of references to sex, an older woman kissing a teenage girl, and some implied sex acts (complete with noises, if no actual nudity). Still, underneath the raunch is the heartfelt message that no matter how great the glory you're chasing, the rewards won't feel sweet unless you really love it and pursue it with good intentions and hard work.

A stripper is shown in the middle of her act -- which she performs scantily clad -- and, later, grinding on a man's thigh. In another scene, the same duo has sex in a minivan; viewers see them making out and hear lots of noises, but no genitals or sex acts are shown. An older woman hooks up with a teenage girl; they're seen kissing. References to many different sex acts.

A woman slams into another vehicle on purpose and out of anger, while there are still passengers in it. A man defaces a competitor's work of art.

Beneath the raunch is a message about nurturing your talents and not being afraid to excel. Also: Do something for the love of it, not because you think it will propel you to the top. True passion will outwit calculation any day.

Adults drink in bars and at social events. A teenager smokes weed with an adult. A foster mom who's an addict is shown asking a child to get her a refill of prescription pills.