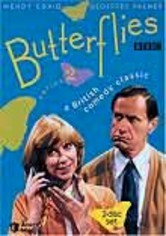 1979 NR 2 discs
The second season of this revolutionary British sitcom picks up with the continuing misadventures of Ria Parkinson (Wendy Craig), a 1970s housewife who's unstimulated in more ways than one. With two sons who spend most of their time fighting and a dentist husband (Geoffrey Palmer) who spends most of his time working, Ria finds that Leonard (Bruce Montague) -- the wealthy businessman who flirts with her -- is starting to look awfully tempting.