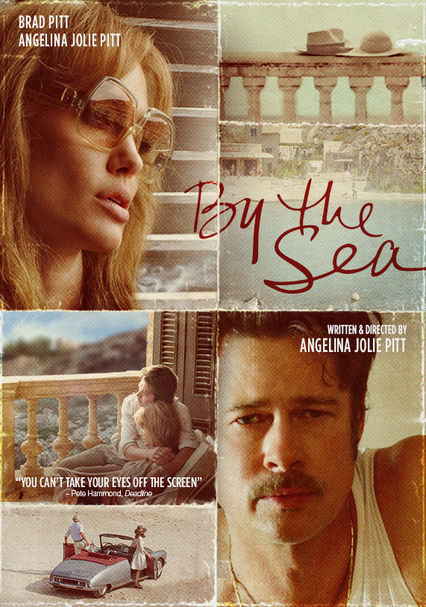 2015 R 2h 2m Blu-ray / DVD
Hoping to save their crumbling marriage, Vanessa and Roland take a trip to a French seaside resort. After forming friendships with some of the town's residents, including a pair of newlyweds, Vanessa and Roland begin to confront their unresolved issues.

Parents need to know that By the Sea is a searing, painful 1970s-set drama about a married couple (Angelina Jolie and Brad Pitt) on the brink of either divorce, self-destruction, or a deeper marital understanding -- or perhaps all of the above. Its subject matter -- marriage, infidelity, and fertility -- is quite heavy and not likely to resonate with younger viewers. Just as well, since one character drinks day and night, and another relies on prescription meds to get through the day. Plus, sexual situations and nudity abound (mainly bare breasts and backsides, though a woman's pubic area is somewhat on display in one scene, albeit shadowed). There's also some swearing, including "s--t" and "f--k."

A couple is shown in the middle of sex; her pubic area is shown (albeit in shadow). Naked male and female bottoms are shown, sometimes during sex. Other scenes show bare breasts, both while bathing and during sex.

A couple fights, sometimes loudly. In one scene, the man grabs his wife's hand and uses it to slap his face, goading her to hit him repeatedly. Other scenes show her kicking him and him handling her face roughly.

Frequent use of everything from "f--k" and "s--t" to "damn" and "a--hole." Some scenes also include swearing in French.

Marriages can be messy and unforgiving, but they can also withstand the most grueling losses and challenges if spouses remember to turn to each other for support, encouragement, and real talk. Other subjects dealt with include infidelity and infertility.

Some brands/logos are seen, including YSL, Louis Vuitton, and Vogue.

One character drinks day and night (a dependence on alcohol is suggested). Another character pops pills.