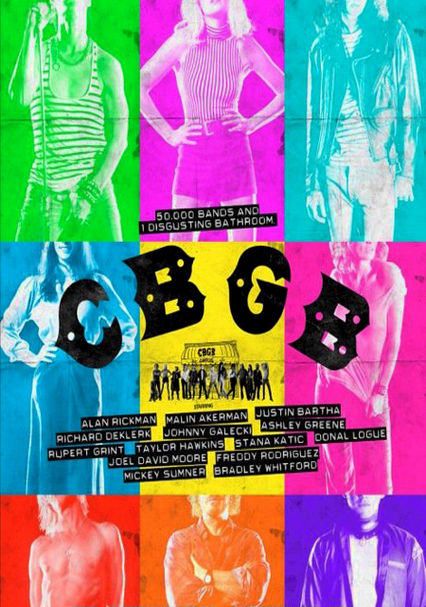 2013 R 1h 41m DVD
Renewing the legend of one of New York's most storied nightclubs, this raucous drama features the punk and rock legends who made CBGB famous. While the club's owner had hoped to open CBGB as a country venue, it soon became something quite different.

Parents need to know that CBGB tells the gritty story of the famous nightclub in New York City, which was the launching point of many great bands. The club setting includes fighting, stabbing, and some blood, and a dead body. There's strong language throughout including "f--k," "s--t," "c--k," and "p---y." There's some brief nudity (one female breast and a few male butts), plus brief images of oral sex, and some innuendo. Characters smoke cigarettes and drink throughout the movie, and there are brief images of characters snorting cocaine. One character is said to be a junkie, though he's never shown taking drugs. The music of Talking Heads, Television, Blondie, the Ramones, the Dead Boys, etc. may be ancient history to today's teens, but those with a curiosity about music history may find this interesting.

Some Hell's Angels beat up some debt collectors in one scene. A band crashes a big truck on the freeway. There's a fight in a convenience store with stabbing and blood (one band member is sent to the hospital). The lead singer of the Dead Boys pretends to choke himself with the microphone cord (and seems to be actually doing it). A dead body shows up in front of the door to the club. The music sometimes has violent themes. Finally, in a prologue, a baby escapes from its crib and runs out the front door and into the woods; the sequence can be harrowing for parents, but the baby comes out fine.

The movie has a vague, semi-buried message about helping people, even if one doesn't have great means. But mostly this is a story about being in the right place at the right time.

The main character likes to drink Fresca and references it at least twice.

The movie takes place at a nightclub/bar, and the liquor flows freely throughout. Characters also smoke cigarettes throughout. One supporting character is shown to be a junkie, though he's never seen taking drugs. (He just appears sleepy and confused.) Minor characters are shown snorting cocaine. The main character swigs from a bottle of vodka, and then pours it in the gas tank of his truck.