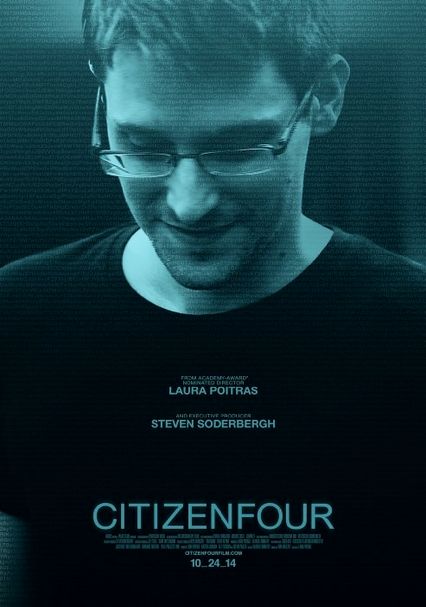 2014 R 1h 53m Blu-ray / DVD
This tension-fueled documentary from filmmaker Laura Poitras follows her 2013 journey to Hong Kong to meet with whistleblower Edward Snowden as he was preparing to release a wealth of classified government documents.

Parents need to know that Citizenfour is a 2014 Oscar-winning documentary covering the tension-filled days before, during, and after whistleblower Edward Snowden revealed the depth and extent of NSA/U.S. government surveillance of its own citizens as well as citizens in many other countries. In one scene, "f--k" is used repeatedly in conversation. Whether you agree or disagree with Snowden's actions, this documentary, just like the revelations Snowden's leaks revealed, should inspire discussion among families on topics such as the power of one person to change the world, privacy, how much is "too much" when it comes to governments protecting their citizens through surveillance, government oppression and suppression, the effect massive surveillance has on its citizenry, and what freedom means in light of Snowden's revelations.

Though mostly contained in one scene, "f--k" is repeated multiple times.

The power of one person to bring about profound change is shown through talk and example. Shows the power of investigative journalism to inform the public of what governments would rather people not know.