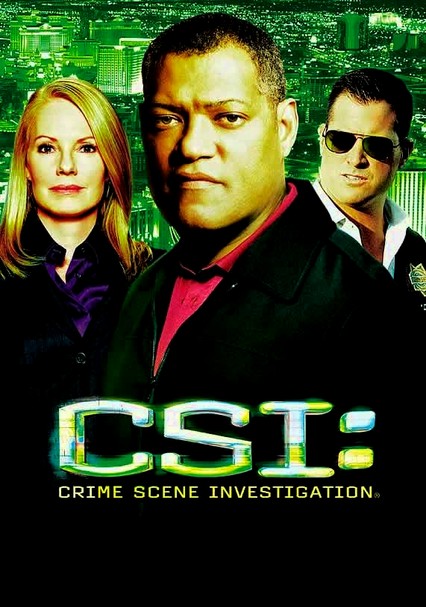 Amid the lights of the Strip and the fast action on the tables of Las Vegas is a dedicated task force in the city's police department: the Crime Scenes Investigation Unit, the most highly touted lab in the nation. Headed by Det. Gil Grissom (William L. Petersen), CSI takes on the goriest, most disturbing of cases that would baffle other units. This collection includes all 23 episodes that make up the first season of CBS's groundbreaking series.

In the second season of the hit CBS series, Gil Grissom (William L. Petersen) continues to lead the Las Vegas Police Department's night shift Crime Scene Investigation unit, one of the top-ranked crime labs in the country. The team investigates the murder of a college student who was having an affair with a married professor, the kidnapping of a real estate mogul's mistress, the death of an ice hockey player and more.

Indefatigable Gil Grissom (William L. Petersen) continues to lead his crack team of Las Vegas crime scene investigators, including Catherine Willows (Marg Helgenberger), as they search for clues in a series of baffling crimes in this action-packed fourth season of episodes. Grissom and his crew use the best scientific equipment and technical methods to solve puzzles and catch criminals in the second busiest crime lab in America.

This Emmy-nominated procedural drama follows a passionate team of Las Vegas forensic investigators who are trained to solve crimes the old-fashioned way, with a little help from the latest technology. As Season 5 unfolds, a heavy workload pushes the staffing limits of the CSI crew, which means setting aside differences with professional rivals. Later, a case turns intensely personal when the CSIs must come to the rescue of one their own.

The dedicated team of Las Vegas forensic investigators -- including senior officer Gil Grissom (William Petersen) and single mom Catherine Willows (Marg Helgenberger) -- continues to solve crimes by examining the evidence with the latest tools at their fingertips. At the outset of Season 6, the old gang is happy to be reunited after being split into separate teams under Gil and Catherine ... and they're just in time to tackle three new cases.

In the seventh season of this popular crime series, rapper Kevin Federline (perhaps best known as Britney Spears's ex) guest stars as an arrogant teenager who harasses the CSI team as it investigates a series of brutal tourist beatings. Not to worry, though: Gil Grissom's (William L. Petersen) dogged investigators won't be deterred as they use all of the latest forensic techniques to reconstruct baffling crime scenes.

In the eighth season of this popular television drama, suspense runs high as Las Vegas's top crime scene investigators, led by Gil Grissom (William Petersen), find the cases they're trying to solve becoming more and more difficult to crack. Whether they're in the cool casinos of the Vegas strip or out in the hot Nevada deserts, these specially trained detectives prove that they have what it takes to get the job done.

In the ninth season of this hit drama, the members of the Las Vegas Crime Scene Investigation Unit put their forensics expertise to the test to solve the trickiest crimes in their jurisdiction, from the Nevada desert to the glamorous Vegas Strip. William Petersen returns as Gil Grissom, who leads a crack team that includes Catherine Willows (Marg Helgenberger), Nick Stokes (George Eads) and Greg Sanders (Eric Szmanda).

In the 13th season of this venerable crime drama, the CSI team of the Las Vegas Police continues to crack difficult and often bizarre criminal cases. Supervisor D.B. Russell heads a team of forensic specialists with an impressive array of skills.

Ted Danson and Elisabeth Shue lead an ensemble cast of criminals and crime-solvers in the 14th season of this police drama set in Las Vegas. The CSI squad continues using its forensic expertise to crack a broad assortment of inexplicable crimes.

This season, the tenacious team of forensic investigators tries to unravel an array of tough cases, including a chemistry teacher's demise, a lethal shooting at a medical marijuana dispensary and the death of a woman in rehab.