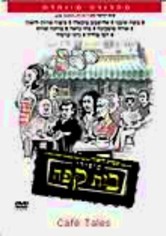 2003 NR 1h 23m DVD
This dramedy, nominated in 2003 for five Israeli Academy Awards, tells the story of the proprietor of a popular café that once catered to the city's intelligentsia. But the establishment's heyday has passed, and though a few patrons still cherish its place in history and society, many more have turned their backs, leaving the café open to the unwelcome entreaties of developers. It's up to a writer (Moshe Ivgy) to rally the masses for a fight.