Cal Pozo's Learn to Dance in Minutes: The Latin Dances 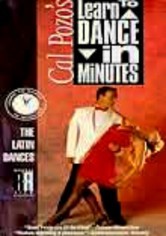 Cal Pozo's Learn to Dance in Minutes: The Latin Dances

1988 NR 0h 50m DVD
Dance instructor Cal Pozo leads this class in Latin dancing based on his award-winning three-step "Learn to Dance in Minutes" system. Pozo begins with a preparatory lesson in the fundamental hip movement of all Latin dances, which he calls "Latin motion." Next, he moves on to a quick review of the basics of the rumba, mambo, cha-cha and tango. Pozo then joins with his associates in his three-step system to teach the steps for each dance.