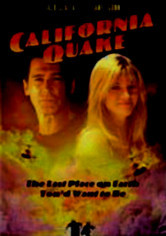 2000 NR 1h 32m DVD
The West Coast is under siege from a geological shift of catastrophic proportions that could leave the state's future hanging in the balance. If the deadly quake that experts predict hits soon -- and it looks as if it will, thanks to illegal nuclear testing being conducted in Los Angeles -- California will disappear from the map, says seismologist Kimberly Stevenson (Janet Gunn). A gun for hire (Jack Scalia) may be her best bet at salvation.