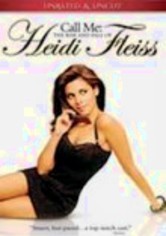 2004 NR 1h 24m DVD
Take an inside look at Hollywood's most famous madam in this made-for-television movie profiling Heidi Fleiss (Jamie-Lynn DiScala). Fleiss seems like an average teen when she begins working as a high-class escort under the guidance of the infamous Madame Alex (Brenda Fricker). Eventually, Fleiss takes control of the prostitution ring, running a profitable and popular operation before the law catches up with her and she finds herself in jail.