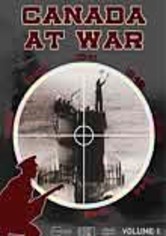 2005 NR 4 discs
Canada's extensive involvement in and contributions to World War II are meticulously chronicled in this historic 13-part series, one of the largest-scale documentary projects ever spearheaded by the National Film Board of Canada. Beginning in 1936 as the clouds of war gathered over Europe, the episodes recount key events, from Canada's decision to enter the conflict through the final victory on May 8, 1945, when Germany surrendered.