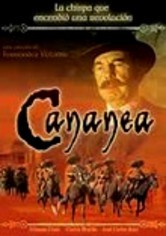 1977 NR 2h 5m DVD
Jose Carlos Ruiz, Carlos Bracho and Milton Rodriguez star in this historical drama about the attempts of Col. William Greene to traverse the Sonora desert and his subsequent discovery of a copper mine in Mexico. Later, when mine workers go on strike demanding better working conditions, the fight grows exponentially and morphs into an all-out war, giving birth to the Mexican Revolution.