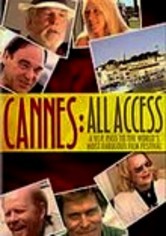 2006 NR 1h 18m DVD
Thanks to this eye-opening, all-access documentary from film historian and former critic Richard Schickel, you can easily slip behind the velvet ropes at the prestigious Cannes Film Festival to witness the pomp, politics and production machine that put it all together. Featured movers and shakers include Clint Eastwood, Martin Scorsese, Ron Howard, Harvey Weinstein, Oliver Stone and many more.