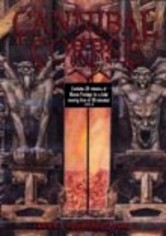 2000 NR 1h 30m DVD
Cannibal Corpse, those dark lords of death metal, unleash their furious concoction of sex, violence and controversy in this concert. The band's technical mastery is on full display through such tracks as "Blowtorch Slaughter" and "I Will Kill You." Also included are interviews with band members George Fisher and Jack Owen, as well as videos for "Devoured by Vermin" and "Sentenced to Burn."