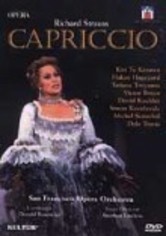 1993 NR 2h 35m DVD
In 18th-century France, a poet (Simon Keenlyside) and a composer (David Kuebler) debate which of their artistic contributions is more important while a widowed countess (Kiri Te Kanawa) listens to their arguments and considers which one to choose as her love. Staged by the San Francisco Opera, this lavish one-act conversation piece was the final opera penned by German composer Richard Strauss. Maestro Donald Runnicles conducts the orchestra.