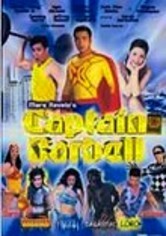 2003 NR 1h 55m DVD
A magic barbell transforms mild-mannered Enteng (Ogie Alcasid) into superhero Captain Barbell (Ramon "Bong" Revilla Jr.) in this adventure based on Mars Ravelo's colorful comics. Barbell has his work cut out for him as he tries to save the world from a host of evildoers --including icy villainess Freezy (Rufa Mae Quinto) and the fire-eating Lagablab (Albert Martinez) -- but somehow finds time to romance his dream girl, Cielo (Regine Velasquez).