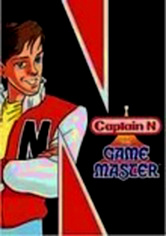 2008 TV-Y7 1 season
After being transported to the universe of Videoland, where Nintendo characters dwell, teenage Kevin joins forces with the N Team of Princess Lana, Simon Belmont, Mega Man and Kid Icarus to defeat the evil Mother Brain and her minions. In this set of cartoon episodes, Simon woos Mother Brain after being struck by a love arrow, and the N Team competes against the League of Darkness in a series of Olympic-style games for control of Videoland.

California teen Kevin Keene gets pulled into the world of Videoland, where he becomes Captain N (for Nintendo) and joins with Princess Lana, Kid Icarus, the supercomputer Gameboy and the rest of the N Team to battle evil, power-hungry Mother Brain.