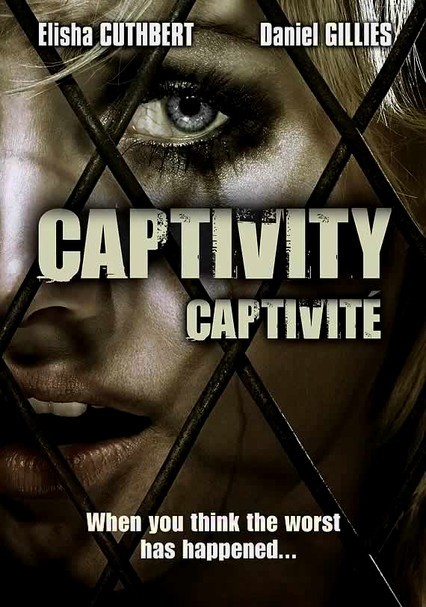 2007 R 1h 25m DVD
After a night of drunken decadence, self-absorbed fashion model Jennifer awakens to find herself locked in a cellar with fellow prisoner Gary, under the watchful eye of a voyeuristic captor with a penchant for sadistic mind games.

Parents need to know that this bloody, torturous (literally and figuratively) horror movie is in no way for kids. Brutal, grisly images -- focused on the kidnapping, captivity, and torture of a model by a killer who resents her "beauty" (and has flashbacks to a sexually abusive mother) -- are nonstop. Expect to see shooting, stabbing, smothering by sand, bondage, hitting, and teeth pulling by pliers. The model is forced to wear skimpy clothing, swallow blended human entrails, and take needles of knockout drugs in her arm. There's one brief but suggestive sex scene; and, in addition to doping his victim, the killer drinks several times while observing her. Language includes repeated uses of "f--k" and more.

Model images show sexy poses (cleavage and breast, no nipple); kidnapped model wears revealing and (in one blurry profile image) no clothing; flashback shows substance-addled mother lying on bed telling her young son that "It makes Mommy feel so good" when "Mommy touches you" sex scene late in the film shows male on top, thrusting (not explicit, but disturbing, as the scene is observed by kidnapper on surveillance monitor); creepy discussion of being "inside her" suggestion of an incestuous relationship between two brothers; suggestions of sex in kidnapper's scrapbooks.

Unrelenting violence and/or threat of violence. Repeated images of bloody wounds and body parts (in one especially gruesome scene, a victim is force-fed bloody, blendered body parts, including an eyeball shown in close-up, until she passes out). Violent acts include acid funneled through a tube (which causes the victim to explode), pouring acid onto a victim so her face burns, dragging and tying up an unconscious woman, a victim screaming and throwing furniture, a victim strapped to a chair and forced to watch another victim showered by acid, threatening displays of "Hanging Man" tarot card and a bloody doll, confinement in a glass box filling with sand, shooting victim's dog in front of her, flashback of a young boy stabbing his mother repeatedly in the stomach, pulling teeth with pliers (very bloody mouth), stabbing, shooting with shotgun (in a couple of scenes), smashing with bat, and spraying poisonous cleaner in face.

Model seems arrogant and shallow -- but also self-knowing -- in her interviews; kidnapper is inexorably sadistic and brutal.

The model is herself a brand in the movie; Palm Pilot is mentioned.

Jennifer has a drugged drink at a club (the image warps to approximate her perspective); kidnapper drinks wine several times; Jennifer is drugged (by needle) and passes out while in captivity; kidnapper's mother appears in flashback, extremely high and discussing her sexual abuse of her son; cigarette butts appear in ashtray.