Carcass: Wake Up and Smell the Carcass 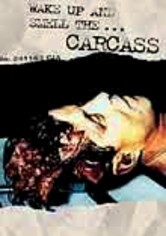 Carcass: Wake Up and Smell the Carcass

2001 NR 1h 48m DVD
British death metal rockers Carcass assaulted the underground club scene in the 1980s and '90s with "grindcore," a barrage of distorted guitar riffs, ear-shattering guttural cries and thrashing drum beats. The band lives up to its name with gruesome lyrics that inspired a future genre: alternative Goth. This compilation features five gory music videos and two live gigs, one at Nottingham Rock City in 1989 and one at London's Astoria in 1992.