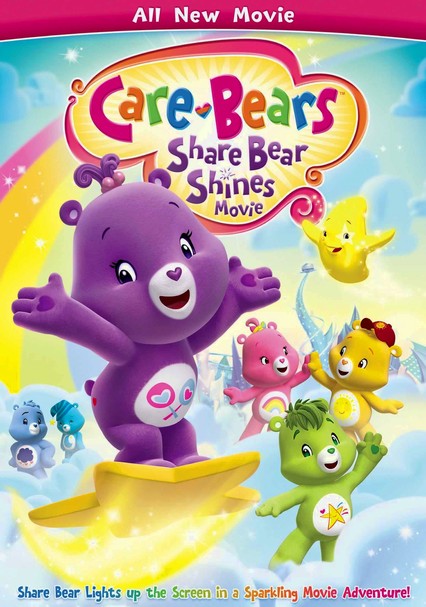 2010 TV-Y 1h 10m DVD
In far-away Glitter City lives Princess Starglo, who teaches little Twinklets how to grow into dazzling stars. When her power begins to fade, and stars vanish from the night sky, Share Bear and his new Twinklet buddy Gleamer come to her rescue.

Parents need to know that this animated space adventure for preschoolers focuses very heavily on the concept of faith. While there's no overt religious content, the storyline could easily be interpreted as a religious lesson: Share Bear staunchly believes in the existence of Princess Starglo (an otherworldy force with powers over the sun and stars), even when the other Care Bears don't feel the same -- though her unwavering stance convinces the others to join in her cause. Overall, the values of teamwork, friendship, and, especially, belief, are stressed throughout.

Oopsy falls from the sky while picking bumbleberries. Grumpy gets struck by lightning and thrown out of a spaceship. Grumpy also gets struck with a lightning bolt in his rear.

Positive messages about characters working together to solve problems. Share Bear maintains her beliefs even when the others doubt her faith in them; the necessity of belief is upheld through songs and characters' actions.

The Care Bears are part of a large toy/marketing franchise, and this movie serves in part as an extended commercial for Care Bear products.