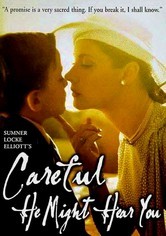 1983 NR 1h 53m DVD
In Depression-era Australia, young PS (Nicholas Gledhill), left alone by the death of his mother, becomes the subject of a bitter custody battle between his two aunts. A pawn in the power struggle between well-to-do Vanessa (Wendy Hughes) and working-class Lila (Robyn Nevin), PS finds his life further complicated by the sudden reappearance of the father who abandoned him. John Hargreaves and Geraldine Turner co-star in this award-winning drama.