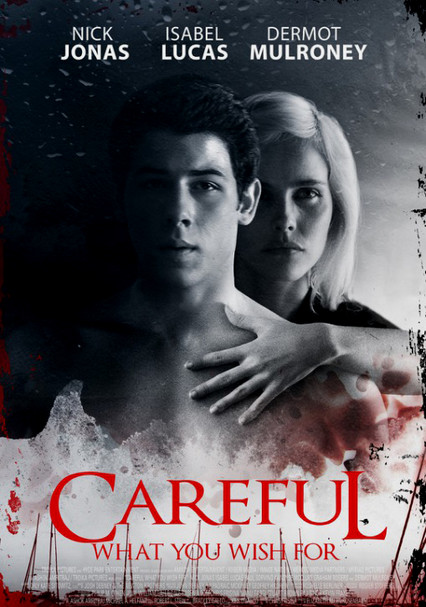 2016 R 1h 31m DVD
When an investment banker rents the house next door for the summer, 18-year-old Doug falls for the man's beautiful young wife, Lena. But the teen finds himself in over his head after he beds Lena and her husband suddenly ends up dead.

Parents need to know that Careful What You Wish For is a sometimes-racy thriller about a high school student (Nick Jonas) who gets involved with his wealthy neighbor's wife (Isabel Lucas) and soon finds himself embroiled in more than he expected. While there are plenty of scenes that show the pair passionately kissing and in bed (and other places) together, there's little nudity onscreen beyond her naked backside. She also wears skimpy swimsuits, etc. A dead body must be disposed of, teens drink beer, and one character smokes; there's some language, too (mostly "s--t" and the like). Some viewers may be bothered by the stereotypes the movie buys into regarding high school boys and older women, as well as attractive younger women and the older men they marry.

A high school student has sex with an older woman; they're shown passionately kissing and seemingly removing their underwear. Her naked backside is glimpsed a few times. Some discussion between teens about sex. Skimpy swimsuits, etc.

A man is murdered off screen; two characters struggle to figure out how to dispose of the body.

Sometimes things aren't what they seem, and it pays to be a little bit skeptical. When there's trouble, bad decisions can make things worse.

A character munches on Doritos in one scene.