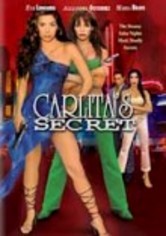 2004 NR 1h 31m DVD
In this spicy thriller, a young woman's dreams of becoming the toast of Broadway are dashed when her secret past catches up with her. Accused of murder after being caught in the middle of a gunfight at a Miami nightclub, Carlita has no choice but to assume a new identity. She must hide from the police until she can prove her innocence, but the bright lights of Broadway are calling her name. Maria Bravo and Alejandra Gutierrez also star.