Carole & Paula in the Magic Garden 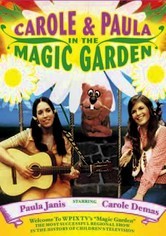 Carole & Paula in the Magic Garden

1972 NR 2 discs
Now parents can introduce their kids to this critically acclaimed children's series from the 1970 and '80s, with this fun-filled, 10-episode collection of the show's most memorable sketches, songs and lessons. Join hosts Carol Demas and Paula Janis as they sing and play guitar, act out exciting stories and pal around with friends Sherlock the squirrel, Flapper the bird and a joke-telling bed of flowers known as the Chuckle Patch.