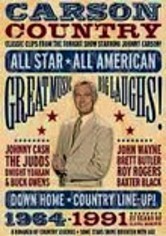 1964 NR 1h 20m DVD
From a rare 1964 kinescope of Johnny Cash performing "Ring of Fire" to latter-day performances by The Judds, Dwight Yoakam, Buck Owens and more, Carson Country presents nearly 30 years of country music and moments from "The Tonight Show." Host Johnny Carson indulges his fondness for country tunes and cowboy culture with appearances by John Wayne and Michael Landon, a quick-draw display by Roy Rogers, a hollering demonstration and more.