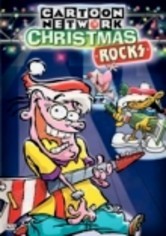 2005 NR 1h 37m DVD
The Cartoon Network's coolest characters celebrate the holidays in this collection of Christmas episodes. The season of giving turns chaotic as Johnny Bravo knocks Santa out; Courage the Cowardly Dog battles an evil snowman; Baboon sets out traps for Santa on I.M. Weasel's rooftop; and Dexter plots to shave Santa's beard off. The fun continues with episodes of "Ed, Edd n Eddy," "The Powerpuff Girls," "Codename: Kids Next Door" and more.