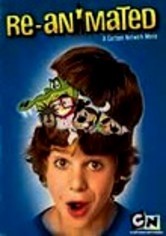 2006 NR 1h 18m DVD
Combining elements of animation and live action, this Cartoon Network original movie tells the story of a socially awkward 12-year-old who, after a freak accident, undergoes a brain transplant and inadvertently becomes someone else. When his own mind is replaced by that of legendary cartoonist Milt Appleday, Jimmy Roberts (Dominic Janes) is suddenly able to see all of Appleday's beloved characters. The catch is … they actually exist!

Parents need to know that this made-for-TV movie combines live action and animation (it's the Cartoon Network's first original live-action film). Most of the goofy humor is based on characters' wacky personalities -- like the oddball dad who puts his pants on in the car, or the green-skinned sister who Mom brought home from her space travels. Peer pressure is an ongoing theme; the main character routinely succumbs to it from the "in" crowd at school, the cartoon characters, and even his best friend. (It's a problem he hastily resolves in the end.) Most violence is either of the "crash-bang" cartoon type or exaggerated live-action peril played for laughs, but it's prevalent enough to make this better for tweens than young kids. That said, the story's overall silliness might even have tweens rolling their eyes. If nothing else, adults will get a giggle out of the blatant spoofs on the Disney conglomerate.

A budding boy/girl relationship includes flirting as well as one slow-dancing scene with a quick peck on the cheek.

Cartoon scenes sometimes have flashy explosions or characters smashed by falling objects or bumping into things. Live-action scenes also include mild peril played for humor -- like electrocution, a knife thrown at a girl (it misses), a fall from a rooftop, and a girl tied to a track in front of an oncoming train. No injuries result from any of the above.

Jimmy's parents are often absent (especially the space-traveling mom), and neither offers much in the way of guidance to their kids. (They even invite a complete stranger with obviously sinister intentions to live in their house.) The dad is so goofy most of the time that his 11-year-old son often rolls his eyes at his father's spaciness. Jimmy succumbs to peer pressure time and time again. The multicultural cast includes two main characters who are Asian.