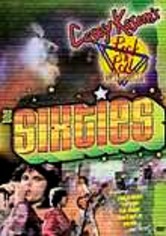 2004 NR 0h 43m DVD
Radio legend Casey Kasem presents this collection featuring momentous occasions in music history. This installment jumps into the 1960s music scene after the "British invasion," when a blues-inspired (and often drug-inspired) guitar-heavy sound was prevalent. Performances include "People Are Strange" by The Doors, "My Generation" by The Who, "Magic Carpet Ride" by Steppenwolf, "Purple Haze" by Jimi Hendrix, "Try" by Janis Joplin and more.