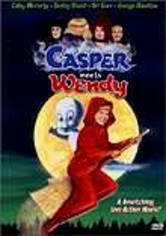 1998 PG 1h 34m DVD
When a warlock (George Hamilton) threatens Wendy the Good Little Witch (Hillary Duff), she and her aunts hide out at a resort where Casper the Ghost is vacationing with his uncles. Although Casper and Wendy are told ghosts and witches don't get along, the two are kindred spirits! This spooky family-friendly adventure finds Casper and Wendy bridging the ghost-witch divide to battle the warlock who is intent on destroying Wendy.

Parents need to know that while no one is injured in this movie, there is a lot of falling, running, jumping, and tripping when people are scared by ghosts. While the tone is usually light, there are also several scenes where the ghosts do things that are scary -- like taking possession of people's bodies and sneaking up on them. Casper's uncles haunt Wendy and her family. In the final showdown, there's lots of screaming and peril and Wendy almost dies.

Wendy kisses Casper on the cheek. Wendy and Casper dance, and Wendy flirts with Josh. A guy pinches women's butts.

There's lots of comic pratfalls, but no one is injured. When scared by the ghosts, various people jump through windows (on low floors), fall over luggage, etc. Josh tries to force Wendy to dance with him, grabbing her arm. One of Wendy's aunts slaps a man's face. Wendy's broom attacks two goons trying to hurt Wendy by hitting them on the head and back. No one is injured. Casper punches a guy out.

A lot of insults directed at Casper and Wendy, but no cursing.

Wendy and Casper are both neglected and picked on by their guardians. Witches and ghosts are also seen as mortal enemies, and they are prejudiced against one another. There's no diversity in the cast.