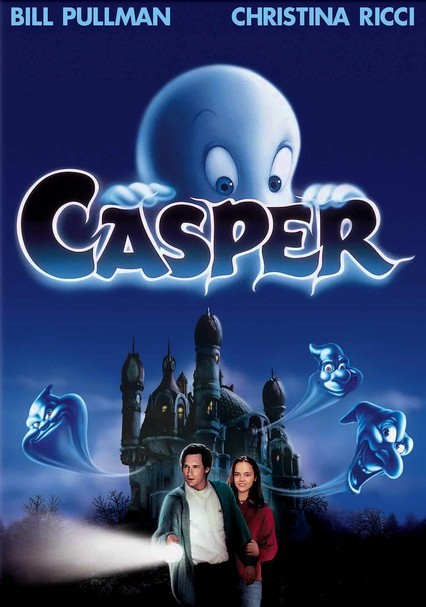 1995 PG 1h 41m Blu-ray / DVD
In this Brad Silberling-helmed comedy, Bill Pullman plays James Harvey, a ghost doctor hired by Carrigan Crittendon (Cathy Moriarty) to rid Whipstaff Manor of spirits so she can find a treasure trove rumored to be hidden there. But her plan backfires when James's daughter Kat (Christina Ricci) befriends Casper, the friendly phantom who inhabits the place along with The Ghostly Trio, who disdain humans. Includes games, featurettes and more.

Parents need to know that Casper is a 1995 adaptation of the well-known cartoon series chronicling the adventures of the titular "friendly ghost." The cartoon Casper and other Casper movies are much milder than this one. There are deaths here and much talk about the spirit world and grieving the loss of parents. The main character, Kat, sees one parent as a ghost, and another parent dies and comes back with the help of an invention. Kat also has a crush on Casper, who died as a tween boy. Casper's ghost uncles can be crude and mischievous and they take Kat's father out drinking at a bar. There is some bullying -- Kat is verbally teased by the popular kids as the "new kid" in school, and Casper's uncles bully him too. There is some profanity: "bitch," "damn," "hell," "Jesus," "for Christ's sake." A tween girl says "piss off." There's also some sexual innuendo: In one scene, Kat's father's pants are removed by Casper's mischievous uncles, and one of the ghosts says that "he is no Marky Mark." Parents expecting a wholesome movie version of the cartoon series will be surprised by the language and violence.

Some innuendo, much of which will go over kids' heads -- as when Casper's mean uncles drop Dr. Harvey's pants, and one comments, "You're no Marky Mark." Tween kissing.

Much fighting and three deaths of characters who are then shown as ghosts. Some characters willingly pass into the spirit world, thinking they can come back with the help of an invention. One of the characters falls off a cliff to her death. Pratfalls and cartoonish violence from Casper's three cruel ghost uncles. Casper talks about how he died when he was a little boy. Ghosts vomit on a priest and turn his head 180 degrees. A woman tries to run over her lawyer with a Range Rover. Casper's uncles bully him verbally and physically.

Occasional profanity, which could be surprising for those expecting something more in line with the more wholesome original cartoon series: "bitch," "damn," "hell," "Jesus," "for Christ's sake." A tween girl says "piss off."

Some messages on acceptance.

One of Casper's uncles kicks Casper with a Nike tennis shoe, the only time any ghost is shown wearing footwear of any kind.

Adult ghosts drink and act drunk. These same ghosts also smoke cigars. Cigarette smoking from the lead female antagonist. One of the lead characters is shown getting drunk and singing karaoke, encouraged by adult ghosts.