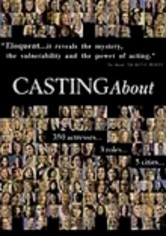 2004 NR 1h 26m DVD
This poetic documentary follows director Barry J. Hershey's process of casting actresses for a film, allowing viewers to become part of the auditions as nearly 200 women perform monologues, do scene work and engage in interviews. When Hershey held these auditions for an upcoming period drama, he found the resulting footage so intriguing that he used it as the basis for this exploration of the unique connection between filmmakers and actors.