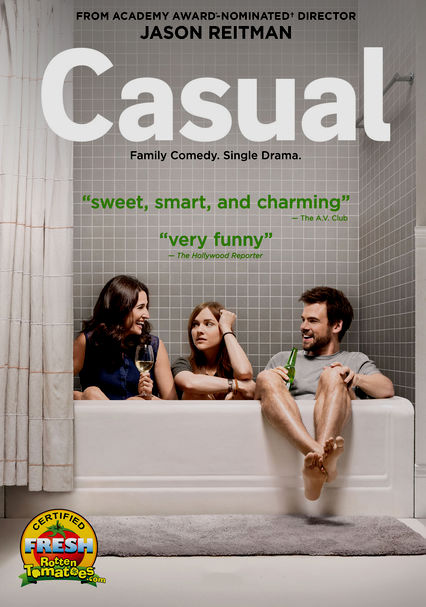 2015 TV-MA 1 season
A new comedy series about a bachelor brother and his newly divorced sister living under one roof again. Together, they coach each other through the crazy world of dating while raising her teenage daughter.

A new comedy series about a bachelor brother and his newly divorced sister living under one roof again. Together, they coach each other through the crazy world of dating while raising her teenage daughter.

Parents need to know that Casual is a dark comedy about a dysfunctional family that lives together. Expect frequent references to sex and graphic discussion of lesbian sex, birth control, and consequence-free sex with strangers. Also expect references to suicide and frequent cursing ("f--k," "s--t"). One character has a casual sex habit and started a website that encourages hookups. We see a man nude from the rear. A man discusses a sexual dream about his father. A teen is having sex with her boyfriend with the consent of her mother, and we see the teen in her underwear. Scenes take place in bars, and characters act drunk.

Frequent references to casual hookups, graphic discussion of lesbian sex; a teenager has sex (offscreen) with her boyfriend; an uncle seems to leer at his niece. A man is nude from the rear. References to infidelity.

Frequent unbleeped cursing, usually jocular: "They're s--t-talking us," "If he won't f--k you, I will." References to sex as "f--king."

Family togetherness and support are stressed; emphasis on casual sex.

Scenes take place in bars. Characters drink too much and act sloppy.