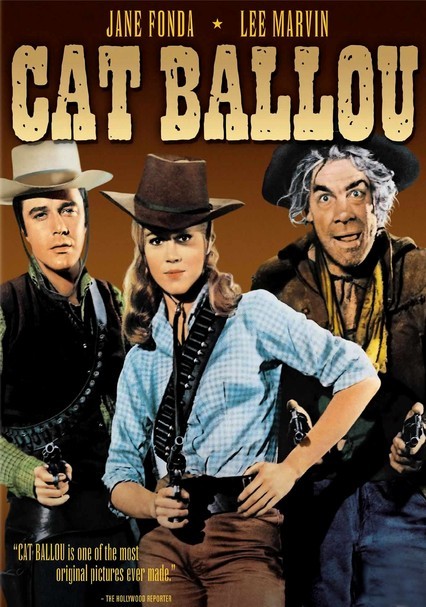 1965 NR 1h 36m DVD
Nat "King" Cole and Stubby Kaye provide a Greek chorus-style narrative in this tongue-in-cheek Western parody that's become a classic in its own right. In director Elliot Silverstein's Oscar-winning comedy, Cat's (Jane Fonda) father has been murdered by a gunslinger (Lee Marvin), and now, the schoolmarm-cum-outlaw must team with boozehound Kid Shelleen (also played by Marvin) to prevent her father's ranch from falling into the wrong hands.

Parents need to know that the humor in this 1965 comedy is based almost entirely on outrageous drunkenness and sly sexual innuendo. The heroine takes the law into her own hands and leads a gang of con men and drunks on a criminal spree to avenge her father's murder. There are numerous action sequences, which include gunfights, brawls, murders, a train robbery -- none of them meant to be taken seriously. A young Native American hero is subjected to some racial taunting. Alcohol and cartoon-like drunkenness are pervasive.

There is some kissing, flirting, and lots of teasing innuendo which will probably go over the heads of most kids. A prisoner escapes from a law officer on a train and ducks into the bed of the very innocent heroine. He hides there leading to much sexual "miscommunication" and a clumsy attempt at seduction. A lecherous old man ogles some sexy women and Cat Ballou pretends to be a prostitute in order to trap him.

A majority of the action scenes, including those with gunplay, are played for humor and with a farcical tone. There is no blood, except for comic effect. There are fist fights and one brawl; a silly prison escape; a toupee is substituted for a scalping; gunshots careen out of control, breaking things and bouncing off walls. In one semi-serious scene the heroine's father is shot down and killed. There is the threat of a hanging, but it's never meant to be taken seriously.

A few "damn"s and a young Native American is treated with disrespect, bullied by some, and called an "injun."

This comic film attempts to turn the traditional western into a farce. As a result, the messages are intentionally perverse. Drunkenness is a great source of humor and fun and has no serious consequences. Engaging in criminal behavior is an easy and successful way to get back at those who are evil. Law enforcement officers cannot be depended upon to act honorably; rather, they are corruptible and dishonest.

Drunkenness is major source of comedy. A leading character is a stumbling, incoherent, and semi-conscious drunkard. He constantly swigs whiskey from a flask or bottle and the audience watches as he gets drunker and drunker and finally passes out. Other characters also drink heavily; their speech is slurred; they fall; they misbehave. There is some cigar smoking.