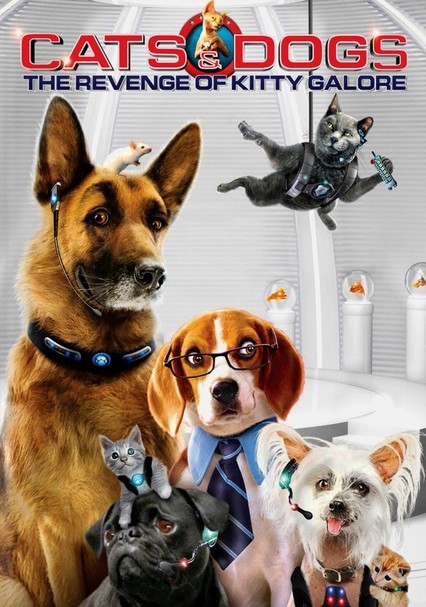 2010 PG 1h 22m Blu-ray / DVD
Cats and dogs must set aside their differences and merge animal instincts when Kitty Galore (voice of Bette Midler), a nefarious feline with a Cleopatra complex, decides to claw her way to global domination in this sequel to 2001's Cats & Dogs. It's spy vs. spy as Butch, Diggs and their calico crew attempt to foil Kitty's hair-raising high jinks while bumbling human companions Shane (Chris O'Donnell) and Chuck (Jack McBrayer) get underfoot.

Parents need to know that this action-comedy sequel includes a good bit of goofy cat-and-dog humor and physical comedy that's OK for elementary schoolers but may not be age-appropriate for preschoolers. Overall, most of the jokes and sight gags are rather tame, although there are quite a few product placements, some use of language like "butt" and "stupid," and a long pet prison sequence that features a cat that sounds and acts like Hannibal Lecter. Of course, most children won't understand the reference, but Mr. Tinkles is still one creepy cat. Note: Since 3-D technology intensifies scenes, it's possible that young kids unfamiliar with the format may be jumpy during the action sequences.

Diggs flirts with female dogs (Afghans) -- i.e. "Helloooo, ladies!" Another character is taunted with "who's your daddy?"

Kitty Galore is an evil mastermind who plans to destroy all dogs in her plan for world domination. She almost succeeds in having Diggs and Catherine killed. There's an explosion and a couple of near disasters, but there are more threats of violence than actual violent scenes. There are also several scenes in which animals do stunts and escape from scrapes a la James Bond.

The movie's main message is that if you look beyond the label "enemy," you could find a friend, a partner, a person who can help you. That's what the cats and dogs do, and they manage to defeat an evil cat in the process.

There's an extended gag about cats who've consumed too much catnip (think "pothead" stereotypes/jokes with cats); Mr. Tinkles is shown having a tropical drink on a beach.