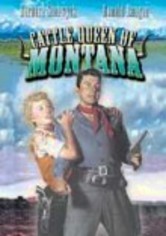 1954 NR 1h 28m DVD
Barbara Stanwyck stars as a feisty young woman who attempts to stake her claim in the cattle business despite threats from greedy land grabbers and their hired killers. Ronald Reagan is the undercover agent who comes to her rescue, even though he is in the midst of a separate investigation to find out who's been provoking the local Indian tribes into attacking the whites. Cattle Queen of Montana is filmed on location at Glacier National Park.