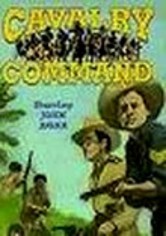 1965 NR 1h 17m DVD
In 1902, a small Filipino village is besieged by guerilla forces lurking in the surrounding jungle. In rides the U.S. Cavalry to save the day. But before the eager troops can effectively battle the rebels, they must first earn the trust of the locals. After the Americans team up with the villagers to build roads, schools and bridges, hearts and minds are won over in this 1963 war drama, shot on location in the Philippines.