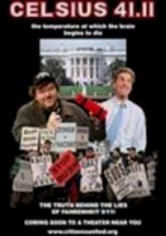 2004 NR 1h 0m DVD
From producers Lionel Chetwynd and Ted Steinberg comes this conservative answer to what they deem to be lies and deceptions presented in Michael Moore's controversial 2004 documentary Fahrenheit 9/11. The title alludes to "the temperature at which the brain deteriorates from heat -- in this case, from Moore's left-wing rhetoric," according to Chetwynd. Included are appearances by, among others, Fred Thompson, pundit Fred Barnes and Michael Medved.