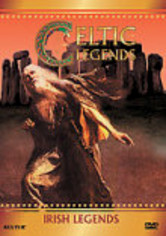 1999 NR 0h 50m DVD
This installment of the Celtic Legends series examines the most intriguing Irish lore, including stories about the Celtic gods of Britain and various military heroes such as Finn MacCummaill, the fair-haired warrior of the Fianna. Though the folklore of Egypt, Greece and ancient Rome often overshadows the legends of Ireland, the tiny island nation has a bold tradition of storytelling and mythology in its own right.