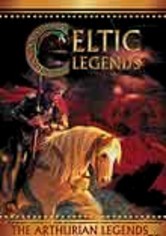 1999 NR 0h 50m DVD
Though modern scholars fail to agree whether he actually existed, the legend of King Arthur and his noble knights of the Round Table has endured throughout the ages, thanks in part to its immortalization in works by Chretien de Troyes, Richard Wagner and Alfred, Lord Tennyson. This installment of the Celtic Legends series explores Arthur's ever-changing image throughout history, from fearless warlord to romantic hero.